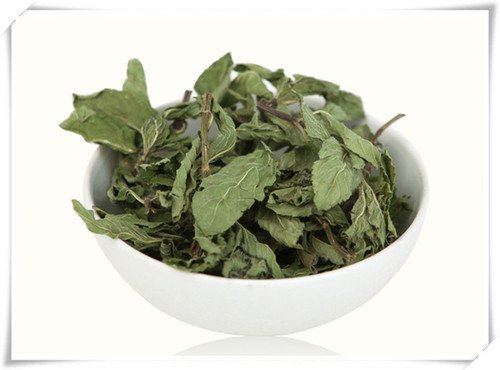 Peppermint (Mentha piperita ) is an aromatic perennial plant that grows to a height of about 3 ft (1 m). It has light purple flowers and green leaves with serrated edges. Peppermint belongs to the Lamiaceae family and grows throughout North America, Asia, and Europe. There are more than 25 species of true mint grown throughout the world.

The plant is harvested when the oil content is highest. When ready for harvest, it is always collected in the morning, before noon sun reduces the leaf essential oil content. This generally takes place shortly before the plant blooms, which occurs in the summer (July through August) or during dry, sunny weather. The United States is responsible for producing 75% of the world's supply of peppermint.

History
Peppermint is a natural hybrid of water mint (Mentha aquatica ) and spearmint (Mentha spicata ) and was first cultivated in England in the late seventeenth century. The herb has been used as a remedy for indigestion since Ancient Egyptian times. In fact, dried peppermint leaves were found in Egyptian pyramids dating back to 1000 b.c. The ancient Greeks and Romans valued it as a stomach soother. During the eighteenth century, peppermint became popular in Western Europe as a folk remedy for nausea, vomiting, morning sickness , respiratory infections , and menstrual disorders. Peppermint was first listed in the London Pharmacopoeia in 1721. In modern times it appears in the British Herbal Pharmacopoeia as a remedy for intestinal colic, gas , colds, morning sickness, and menstruation pain .

General use
Peppermint is one of the most popular flavoring agents. Many products contain peppermint, including chewing gum, mints and candies, ice cream and other sweets, tobacco, toothpaste, mouthwash, coughdrops, teas, alcoholic liqueurs, and digestive aids . It is also used to scent soaps, perfumes, detergents, lipsticks and other cosmetics, and is an ingredient in many over-the-counter medications. Therapeutically, peppermint is used to treat many ailments of the skin, circulatory system, respiratory system, digestive system, immune system, and nervous system.